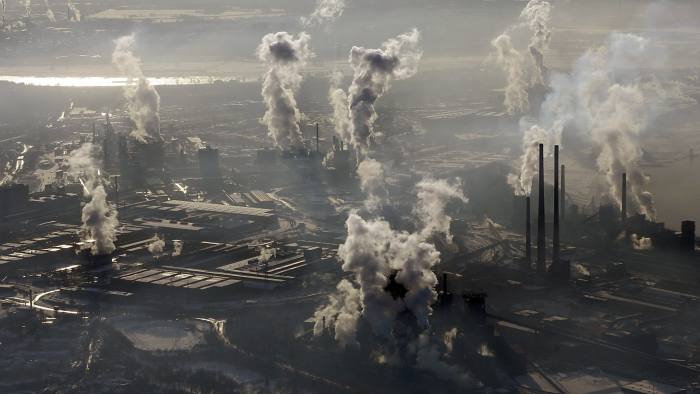 Brussels is preparing to unveil ambitious new carbon emissions targets as the European Parliament ramps up pressure on the incoming European Commission by declaring a “climate emergency” in the EU.

According to a leaked document seen by the Financial Times, incoming commission president Ursula von der Leyen will begin her term by asking EU member states to commit by next year to reduce their 2030 carbon emissions from a target of 40 per cent at present to “at least 50 per cent and towards 55 per cent”.

The plan emerged as the European Parliament declared a climate emergency in the EU, ahead of next week’s UN COP25 summit in Madrid. The largely symbolic move makes the EU the first power — along with individual countries such as the UK and France — to make the declaration.

“The fact that Europe is the first continent to declare a climate and environmental emergency, just before COP25, when the new commission takes office, and three weeks after Donald Trump confirmed the US withdrawal from the Paris agreement, is a strong message sent to citizens and the rest of the world”, said Pascal Canfin, the French En Marche MEP who proposed the motion.

Bas Eickhout, a Dutch Green MEP, said the declaration had to be more than a symbolic gesture. “This must be followed by serious and credible actions,” he said.

The 2030 emissions target has emerged as a sensitive flashpoint in EU climate policy. Nine member states, including France, the Netherlands, Sweden and Spain, have pushed Brussels to embrace a higher 55 per cent target but business groups have complained that raising previously agreed goals will impose fresh burdens on companies.

To soften criticism, Brussels will come up with a “comprehensive plan” on how to raise the 2030 target by next autumn, insisting that it has to be done in a “responsible way”, according to the document.

EU officials said the 50-55 per cent range was deliberately chosen to avoid antagonising governments such as those of Germany and Poland, which are reluctant to accelerate the pace of emission cuts, fearing their businesses will not be ready.

Supporters of faster emissions cuts say the EU cannot reach its goal of becoming the world’s first climate neutral continent by 2050 without speeding up short-term measures. They argue that even a 55 per cent target is not enough to limit global warming to less than 2C, as agreed under the Paris climate accord.

Franziska Achterberg, spokeswoman for Greenpeace, said the October 2020 deadline would mean EU governments would struggle to make the pledge in time for the next global UN summit in November 2020.

“Scientists estimate that current EU commitments to cut greenhouse gas emissions would lead to up to 3C of global heating and irreversible destruction from climate breakdown. Greenpeace and other environmental organisations are calling for a target of at least 65 per cent by 2030, compared to 1990,” said Ms Achterberg.

The commission’s “green new deal” will also propose the EU’s first climate law, enshrining the 2050 net zero target into domestic legislation by March 2020. The package will be unveiled on December 11, a day before a European leaders’ summit at which Poland, Hungary and the Czech Republic will be urged to agree on the bloc’s 2050 carbon neutrality target. The three countries are the only EU members yet to sign up.

Ahead of the summit, Ms von der Leyen will also reveal a €35bn transition fund to help coal-dependent economies such as Poland shift to greener energy sources, said EU officials.

Brussels’ green deal will also include plans to revamp the EU’s cap-and-trade carbon emissions trading scheme (ETS) to include the maritime industry and road transport, according to the document. Business groups have also called for the commission to force third-country importers of steel to pay into the system as the price for entering the EU market.

Other measures will include a green industrial policy by March 2020, plans to rework EU state aid rules to allow for the development of green technologies, a European reforestation plan and €2bn earmarked for green research and development in 2021.

Greenpeace have released a new report highlighting the human and economic cost of pollution from fossil fuels. It found that burning gas, coal and oil leads to three times as many deaths as traffic accidents. It is estimated that polluted air costs China $900 billion each year while annual costs for the United States add up to approximately $600 billion
Source: Forbes

Pollution levels in Beijing have soared to the highest level in nearly two years and are likely to worsen. The most usual suspects for the smog have been crimped by the government in order to halt the spread of the Coronavirus. Experts have pointed the cause to several possibilities, including residue from natural gas burned at power plants and home heaters, emissions from steel mills and industrial facilities.
Source: Bloomberg

The US cut its CO2 emissions more than any other country in the world in 2019, helping to keep total global emissions from growing past 2018’s record-breaking high

International Energy Agency released its report on global CO2 emissions, which showed that over the last 30 years, the main driver of CO2 has been largely driven by China and India, with emissions rising from 9.2 gigatonnes in 1990 to 22 gigatonnes in 2019
Source: Daily Mail