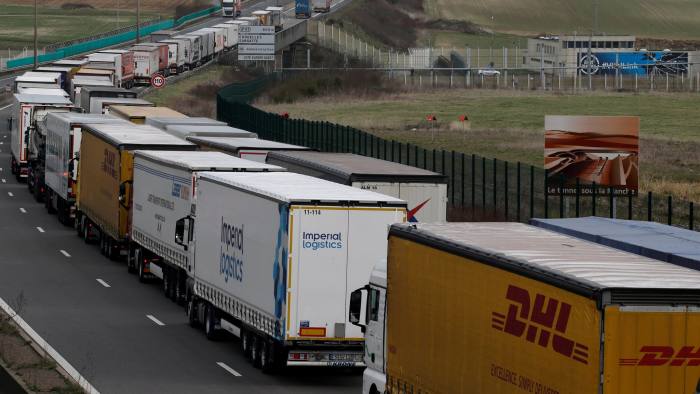 An alliance of big European companies, including Nestlé, Unilever and AB InBev, has called on Brussels to help them tackle the enormous carbon footprint of road freight by compelling EU truckmakers to mass produce zero-emission vehicles.

In a letter sent on Wednesday to the European Commission’s newly installed president, Ursula von der Leyen, the companies say “the current supply [of electric trucks] in Europe is unfortunately nearly non-existent, forcing us to build our own vehicles or initiate our own pilot projects”.

Heavy-duty vehicles are accountable for about 5 per cent of greenhouse gas emissions in the EU.

The 30 signatories ask Ms von der Leyen, and vice-president Frans Timmermans, in charge of the Commission’s upcoming “Green New Deal”, to impose “ambitious and binding” sales targets for zero-emission vans and trucks over the next decade.

The group of companies, which also includes German retailers REWE and Metro, argues that Brussels needs to follow California’s lead, and create a market for e-trucks by introducing a law that mandates their production.

The call underscores the challenges faced by companies that have pledged to cut their emissions to net zero but lack the tools to achieve the goal and often operate in countries with much laxer targets.

Bart Vandewaetere, head of government relations for Nestlé in Europe, said the company aimed to be carbon neutral by 2050, but to meet this ambition, it needed “to leverage technology to reduce carbon emissions of our road transport”.

“We, however, see limited development of zero-emission trucks,” he said, adding that new legislation “would help guide all players into the same direction and help make Europe the first climate-neutral continent”.

Major manufacturers, including VW spin-off Traton, have been reluctant to accelerate the rollout of battery-powered trucks, citing the lack of demand from business customers and inadequate infrastructure.

“In 2040 the acquisition and cost of ownership of battery or hydrogen-powered trucks is still likely to be even higher than that of diesel trucks,” said Martin Daum, the chief executive of the world’s largest heavy-duty truckmaker, Daimler, in October.

The company is testing a dozen prototypes with customers including Hermes, the German parcel delivery group, but only plans to mass produce e-trucks from 2021. Production of Tesla’s “Semi”, initially slated for this year, has been pushed back to at least 2020.

Earlier this year, the EU introduced a requirement for CO2 emissions from trucks and lorries to be reduced by 30 per cent in the next 10 years. But the current regulations do not oblige manufacturers to sell a specific number of emissions free vehicles.

“Requiring the Daimlers and Tratons of this world to make and sell more zero-emission vehicles will bring down these costs even more.”

A group of 14 US lawmakers have introduced a bill in the Congress which demands the government to identify, analyse, and combat alleged efforts made by the Chinese government to exploit the COVID-19 pandemic for nationalistic gains. The ''Preventing China from Exploiting COVID-19 Act'' would mandate the Director of National Intelligence (DNI) to investigate the ways in which the Chinese government intends to seize on the COVID-19 pandemic to promote its interests on the national stage and evaluate the risks to the United States.
Source: NDTV
17:48 09.07.2020

White House officials have warned against investing in Chinese companies and said that additional sanctions could be on the way in return for China’s role in spreading coronavirus. Officials said investments in China were exposing people to “unnecessary economic risk” and channelling funds into companies “that raise significant national security and humanitarian concerns”, including some that supply the Chinese army.
Source: Independent
17:45 09.07.2020

Air pollution has caused an estimated 49,000 deaths and $23 billion in economic losses in the cities of Beijing and Shanghai alone since Jan. 1, 2020, according to a “clean air counter” launched by environmental groups on Thursday.
Source: Reuters