Global emissions have risen to a record high, according to a UN report that dashes hopes that greenhouse gases had peaked after three previous years of little or no change.

Emissions increased by 1.3 per cent to 53.5 billion tonnes in 2017 because of global economic growth and weak efforts to improve energy efficiency, the report by UN Environment said. There were “no signs of peaking”.

It added that emissions would have to fall to a maximum of 40 billion tonnes by 2030 to have a good chance of meeting the target in the Paris agreement of limiting global warming to below 2C. 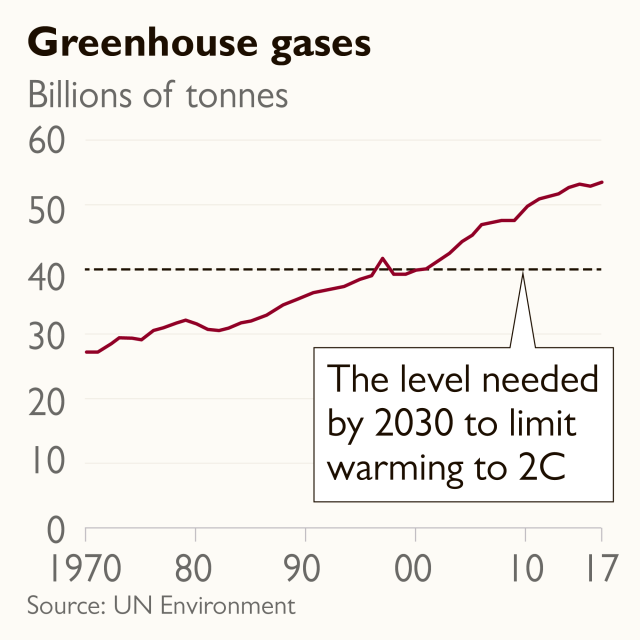 Analysis of all countries’ existing policies showed that the global total would carry on rising and reach 59 billion tonnes by 2030, the report said. This level of emissions would trigger catastrophic climate change, with previous research showing that it would result in the loss of 99 per cent of coral reefs, cause sea levels to rise by a metre and put hundreds of millions of people at risk of starvation because of crop failures.

The report said that to remain within the 2C limit cuts to greenhouse gases must triple compared with current plans over the next 12 years. Cuts would have to increase fivefold to keep warming to 1.5C, the level above which damage to human livelihoods and wildlife would rapidly escalate.

It concluded that even if all countries met their self-imposed climate targets the global temperature would still rise by 3.2C by the end of the century.

“Global peaking of emissions by 2020 is crucial for achieving the temperature targets of the Paris agreement, but the scale and pace of current mitigation action remain insufficient,” it said.

Many wealthy countries or trading blocs were on course to miss their climate targets for 2030, including the US, Canada, Australia, Saudi Arabia, South Korea and the 28 EU member states, which have a collective target, the report added.

Many countries have yet to agree a year by which their emissions will reach a peak and then decline, including India, Saudi Arabia, Indonesia, Turkey and Argentina. Emissions peaked in the EU in 1990 and in the US in 2007 and China has said that its emissions will begin to decline after 2030.

The report was introduced by Joyce Msuya, UN Environment’s deputy executive director. She said: “The science is clear. For all the ambitious climate action we’ve seen, governments need to move faster and with greater urgency. We’re feeding this fire while the means to extinguish it are within reach.”

The report said that the gap between current emissions and the safe level needed by 2030 could be narrowed by much greater investment in wind and solar power, faster introduction of energy-efficient appliances and cars, and stopping deforestation.

Jian Liu, UN Environment’s chief scientist, said that phasing out fossil fuel subsidies would cut global carbon emissions by up to 10 per cent by 2030. Iran, China, Saudi Arabia and Russia each spend more than £15 billion a year subsidising the consumption of fossil fuel.

Richard Black, director of the Energy and Climate Intelligence Unit, which lobbies for greater action on climate change, said that while the growth of emissions in 2017 was a major challenge to governments, the report also showed that pollution was growing by much less than the global economy.

“So while some may see this as yet more doom and gloom, it’s clear that governments can make global carbon emissions peak and decline soon if they simply do more of what’s proven to work, such as cutting energy waste and switching from coal to clean energy,” he said.

The country is continuing to strengthen its anti-pollution controls and meet 2020 envionmental targets but has now said that the pandemic would ‘weigh’ on these intensity goals. This is another excuse for the country who is using this as a safety net if it fell short of its energy efficiency goals, like it did last year.
Source: Strait Times (Reuters)

China’s New Outbreak Shows Signs the Virus Could Be Changing

Chinese doctors are seeing the Coronavirus manifest differently among patients new cases in the NE region, compared to the initial outbreak in Wuhan. Patients are taking longer to develop symptoms after infection, making it harder to identify cases. 46 cases have been reported over the past two weeks. China has one of the most comprehensive virus detection and testing regimes globally and yet is still struggling to contain its new cluster.
Source: Bloomberg