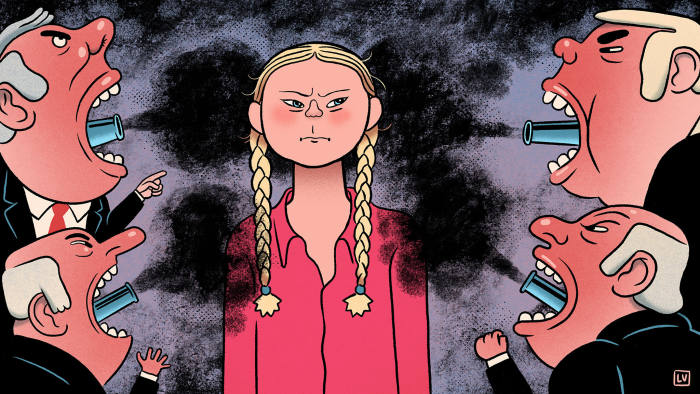 One of the things that has bothered me for a while is why so many middle-aged men seem to hate Greta Thunberg. Suddenly, thanks to her speech to the United Nations, I know. They are already rowing with their teenage kids and don’t need another one on their case.

It was the furious, accusatory tone in which she chided her audience: “How dare you? You have stolen my dreams and my childhood.” Has not every parent had that clash, albeit more usually about whether they can sleep over at Charlotte’s on a school night?

Let me stress, before going further, that I regard Thunberg as a force for good, even if some of her catastrophising language can be counterproductive. She deserves appreciation, not abuse.

But perhaps because of her remarkable efforts, the young environmental campaigner seems to bring out the worst in a certain cohort, especially on the right.

Some of these people are beginning to demonstrate an almost pathological loathing for someone who is, after all, a child with Asperger’s syndrome trying to save the world.

The vituperation goes beyond the contrarian instinct to recoil from anyone depicted as a modern-day saint. Some joked about her yacht to the US sinking; another compared her appearance to the children in Nazi propaganda. Is this just because she is cutting through or is there something else going on?

Now it is clear. Her speech transported me back to every teenage row with the spawn, especially with the girl, who has a handy line in invective.

Phrases such as “How dare you?” and “you would be evil” are very much swiped from the Bunty guide to teen rage. The only thing missing was a threat to never speak to us again if we don’t reach net zero by 2030.

Happily, it has been a while since my last domestic Thunberging but the tone was definitely familiar. I can hear the next one now: “You have stolen my dreams and ruined my childhood. How dare you stop me going to Glastonbury?”

Of course, the main reason why some rightwingers are so agitated about her is that they do not like her message, but the messenger herself obviously riles them too.

Once you see this through the prism of teenager and parent, however, it all begins to make sense. No one likes being berated by their children, least of all when we suspect they may have a point. Greta is guilt-tripping the adults on a planetary scale.

Hence the instinctive response. This is the kind of stroppy defiance that makes a certain type of adult want to go out and trash the planet, just to show who’s boss.

“How dare you talk to me like that, young lady? I’m jetting off to the US for a steak supper to teach you a lesson. In fact, I may eat a whole cow.

And as for that transatlantic sailing trip, well, you can forget about that. You are GROUNDED. Think of it as my contribution to reducing the family’s carbon footprint.”

This is the age at which we parents feel control slipping away. The spawn are standing on their own feet; they are imposing their opinions on us.

No wonder some adults are hacked off. We are not ready to surrender our grip on the world just yet. We’ve still got a few years of carbon emissions left in us.

It’s only us drippy liberals, raised on books telling us how to communicate with our kids, who can cope with her onslaught. But even we feel the menace.

We see the spawn watching Greta and we fret. She badgered her parents into turning vegan. What if the girl tries to do the same thing at home?

Happily, I can recommend an answer for those threatened dads. Start urging your children to be “more like Greta”. Mournfully, turn to your teens and say, “I wish you were like that young Swedish girl. You are always on the phone with your mates while she’s out saving the world. You could learn from her.”

Not only might you feel more positive about Greta, it is also guaranteed to turn your offspring back into carnivores.

It won’t help the environment much but a lot of angry men will feel happier, and that is surely going to make the world a better place.

Greenpeace have released a new report highlighting the human and economic cost of pollution from fossil fuels. It found that burning gas, coal and oil leads to three times as many deaths as traffic accidents. It is estimated that polluted air costs China $900 billion each year while annual costs for the United States add up to approximately $600 billion
Source: Forbes

Pollution levels in Beijing have soared to the highest level in nearly two years and are likely to worsen. The most usual suspects for the smog have been crimped by the government in order to halt the spread of the Coronavirus. Experts have pointed the cause to several possibilities, including residue from natural gas burned at power plants and home heaters, emissions from steel mills and industrial facilities.
Source: Bloomberg

The US cut its CO2 emissions more than any other country in the world in 2019, helping to keep total global emissions from growing past 2018’s record-breaking high

International Energy Agency released its report on global CO2 emissions, which showed that over the last 30 years, the main driver of CO2 has been largely driven by China and India, with emissions rising from 9.2 gigatonnes in 1990 to 22 gigatonnes in 2019
Source: Daily Mail